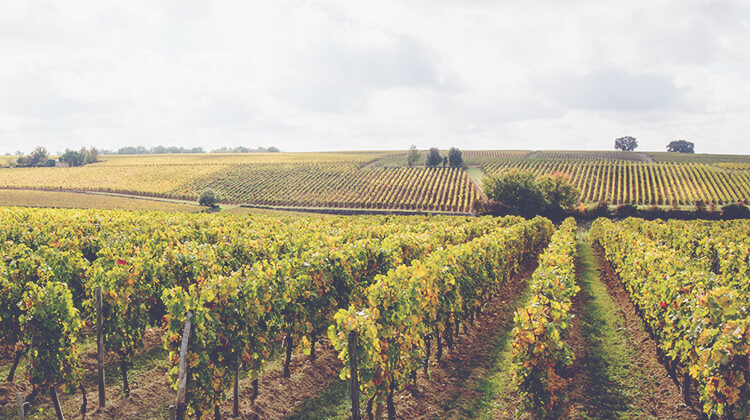 To paraphrase Austen, it is a truth universally acknowledged that Bordeaux produces some of the best red wines in the world… but what of its whites? Although they only represent around 7-8% of the wines sold from the region – from the minerally, citrus-driven dry wines to the gloriously moreish and multi-layered sweet wines – the white wines of Bordeaux thoroughly merit their standing amongst the world’s greatest.

Sauvignon Blanc originated in Bordeaux, even pre-dating the Cabernet Sauvignon vines. Indeed, before the 1800s, the region was better known for its beloved sweet wines from Sauternes and had a loyal and high profile following. Although the rise in demand for claret has risen over the centuries, it was only just over 60 years ago that Bordeaux used to produce roughly equal amounts of red and white wines. However, after a devastating frost in 1956 wiped out swathes of vines, a vast amount of these were replanted with red varietals due to the consumer thirst for red Bordeaux. With the exception of Sauternes, which has always had a big international following, the dry white wines of Bordeaux continue to live in the shadows of their neighbouring reds. This is a crying shame for many who have yet to taste the fresh complexity of a quality white Bordeaux; on the other hand it does mean that the region still offers exceptional value for the cognoscenti, oenophiles and bargain-hunters who know a good thing when they taste it. Bordeaux offers an incredible diversity of styles, with different terroir, viticulture and vinification across the various chateaux and regions, so when it comes to white Bordeaux there is truly something for everyone at all price tags.

Dry white Bordeaux is usually a blend of Sauvignon Blanc and Semillon. Whilst inexpensive options can be found from Entre-Deux-Mers and the generic Bordeaux Blanc (made from grapes across the region as a whole rather than a specific district), the best examples come from Pessac-Leognan and Graves. Here the white wines of Haut Brion and La Mission Haut Brion wear the crown, rivalling the greatest whites of Burgundy in quality, longevity and price tag. If over £6000 IB a case is out of budget though then there are other excellent examples from these regions. Domaine de Chevalier, Smith Haut Lafitte and Pape Clement all produce stellar white wines and at far more affordable prices. Both the Left and Right Banks have their own glitterati of whites too, including Pavillon Blanc du Margaux, Blanc de Lynch Bages, Valandraud and Mouton Rothschild’s Aile d’Argent to name a few, however not all these come with hefty price tags either. Whilst the white of Chateau Margaux might cost over £150 IB a bottle, the families of both Lafleur and Le Pin produce wonderful whites for under £10 IB a bottle, such as Grand Village Blanc and Puygueraud.

In terms of style, dry white Bordeaux leans more towards the elegant profile of citrus fruits (lemon peel, lime), orchard fruits (green apple, pear, white peach) and floral nuances (elderflower, jasmine and honeysuckle) with a wonderful acidity and freshness together with a mineral backbone. The Sauvignon Blanc in the blend contributes towards the crisp, grassy and herbaceous character of the wine, whilst the Semillon brings body and richness, giving it a fuller profile, added complexity and depth. Malolactic fermentation is avoided so as preserve the freshness, although both lees stirring and oak barrel aging are often used resulting in a richer and more complex wine. In youth the lively and fresh flavours abound, and many choose to drink their white Bordeaux in the primary stages of its life due to this irresistible vitality, however with a quality bottle if you can resist popping the cork for a few years then a more mature bottle will proffer toasted almonds, brioche, hazelnut and butterscotch. The best examples can age for decades.

As well as being a light and refreshing aperitif, white Bordeaux is one of the ultimate food-pairing wines. It is a match made in heaven with seafood and sushi, the salinity cuts through creamy dishes beautifully and it can even hold its own against spicy cuisine. It also complements most hard and soft cheeses very well.

Of course, Bordeaux is not just limited to the dry whites discussed above, for who could neglect the glorious nectar that is the sweet white? Sauternes is located at the southern end of Graves and is made up of five villages: Sauternes, Barsac, Bommes, Fargues and Preignac. Barsac is the only one allowed to state its village on the label of the wine. Whilst the sweet white wines only make up a meagre 2% of the wines produced from Bordeaux, they still command a significant global following and reverence. Chateau d’Yquem of course is the jewel in the crown, with history of royal provenance going back to the Middle Ages when the King of England, Henry VI, owned the estate. Its wines have been imbibed by the great and good throughout the centuries, from Thomas Jefferson to our own Queen Elizabeth II. By the 19th century Chateau d’Yquem had already secured its place on the pedestal of the greatest sweet wine ever made, and thus was made the only premier cru supérieur in the 1855 classification by Napoleon III. Although you need to part with a pretty penny to taste Yquem, there are other stellar wines from Sauternes which represent incredible value for money, such as De Fargues, Rieussec, Climens, Giraud, Suduiraut, Doisy Daene… I could go on, but enough about the chateaux for now, a key factor to understanding this sweet nectar is to know how it is made.

Botrytis Cinerea, or noble rot as it is also known, is a fungus which only occurs in certain climatic conditions and which is the key factor in the creation of sweet white wines. Unlike other fungus and bacterial attacks such as grey rot, noble rot is one of nature’s very own winemakers. It occurs when moisture coats the grapes in the form of morning mists, in Bordeaux’s case due to the mixing of temperatures from the Garonne river and the tributary of the Ciron. The grapes must be fully ripe before the botrytis attacks, and the alternating between damp conditions in the morning and dry afternoons in the sunshine is imperative for the grapes to dry and become steadily more concentrated as the fungus sets in. Without these long spells in the sun, too much moisture can result in grey rot setting in, which creates rotten tastes in the berries instead of the beautiful honey notes we would expect from a Sauternes. The botrytis contributes additional glycerin, acidity and heightened sugar levels by reducing the water within the grapes, resulting in highly concentrated flavours. It is also because of this magical fungus that sweet white wines require a very lengthy and painstaking harvest. noble rot attacks the grapes in different stages along the way, so the teams picking the grapes have to comb the vineyards several times collecting only the botrytised grapes and waiting patiently for the others to shrivel enough to be picked. Harvest for Sauternes finishes in late November instead of September/October like the rest of Bordeaux. Add this to the fact that the yields are always low due to the lack of juice within the shrivelled grapes and the required extensive pruning throughout the year so as to create optimum conditions for botrytis cinerea to flourish, it is no wonder that Sauternes is the most expensive wine to make in the whole of Bordeaux.

The main grapes used in the creation of Bordeaux’s sweet white wines are Sémillon and Sauvignon Blanc. Before the 19th century, Sauternes was planted with just as much Sauvignon Blanc vines as Sémillon vines, however after the phylloxera epidemic the majority has now been planted with Sémillon (approximately 75%). This grape originated in Sauternes, and is the backbone of the sweet wine blends. On the one hand its weak skin is more susceptible to noble rot, however it also means it is harder to grow than Sauvignon Blanc. Nevertheless the two grapes make a great team, with the Sémillon contributing richness and viscosity whilst the Sauvignon Blanc adds the vital acidity and freshness to the wine so as to stop it getting too cloying.

The flavours of a good Sauternes can be nothing short of sublime. These wines proffer intense yet elegant flavours including honey, apricots, peaches, marmalade, butterscotch, orange blossom, honeysuckle, candied orange peel, tarte tatin, hazelnuts, lemon curd… the list goes on. However this multi-layered mélange of flavours are all supported by a piercing acidity, cutting through the full-bodied structure and delivering incredible freshness. Each sip begs for another and the best will live on for decades, with more mature examples displaying notes of figs, chocolate shavings, toffee and candied walnuts and deepening in colour from light to dark gold.

A crying shame for Sauternes, however, is the lack of knowledge about what to serve it with. Many assume, as a sweet wine, that it should only be served with dessert. Not so. The balancing acidity of the wine means it is incredibly versatile, and can be paired with a huge variety of dishes. Although it complements certain puddings wonderfully, for example it is a match made in heaven with crème brûlée, passionfruit pannacotta, French fruit flans and tarte tatin, it is also the ideal accompaniment to the cheeseboard. Creamy cheeses like Epoisses go beautifully, as do the blues like Roquefort and Stilton. If you fancy starting dinner with a difference, then the classic combination of foie gras and Sauternes is always a winner and can be done with the likes of chicken liver parfait and other patés. Alternatively try it with shellfish starters (scallop dishes and fresh oysters are both excellent matches) or terrines. Although pouring a sweet wine at the start of a meal does sound rather left-field, the vibrant acidity of the Sauternes actually serves to engage the senses and whet the appetite for the food ahead. Back in the day it was the ultimate aperitif and served alongside amuses bouches, although these days it tends to be opened at the end to pair with the dessert and cheese, and consequently is all too often forgotten about. The Bordelais often serve it with chicken dishes, especially when the bird is basted in the stuff, and duck a l’orange is a classic combination.

I daresay every time you taste a dry white Bordeaux or a Sauternes, you remark how much you like them and how odd it is that you never seem to buy them, so why not take a look on the website and see what takes your fancy.