A Guide to German Wine 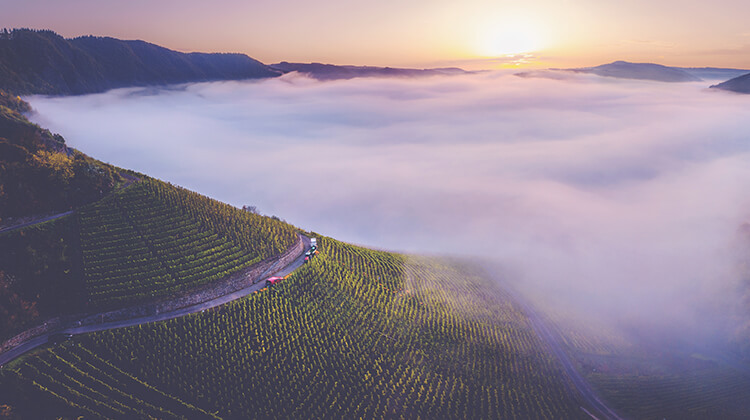 Germany is a treasure trove of distinctive and spectacular wines, some of the finest wines in the world in fact. Handpicked, hand sorted, and minimalist winemaking intervention means they express their terroir like few wines in the world can. Germany is increasing its fame for Pinot Noir – or Spätburgunder as it is known locally – with the finest examples standing shoulder to shoulder with some of the best in Burgundy and the New World. However, as Pinot Noir is to Burgundy, Riesling is to Germany, where it reaches its greatest expression. The sheer versatility of the grape means winemakers can produce several drastically different styles of wine in the same vintage. The vineyard microclimate and thus varying levels of ripeness, dictate the style – dry to very, very sweet – take your pick!

In the 19th century German wine was predominantly dry in style. These wines were at the top of the wines lists in the best restaurants across the world from Paris to New York and sold for prices higher than Bordeaux’s First Growths. These dropped out of fashion after WW2 when sweet wines became nectar for sugar-deprived drinkers and exports soared. This unfortunately led to mass poor imitations flooding the market in the 1980s which gave German Riesling a bad reputation. The likes of sweet and cheap Liebfraumilch were produced on a huge scale – Blue Nun sold 175 million bottles in 1984 alone! Regardless of the nosedive from hero to zero in a short space of time, those in the know continued to support the fantastic producers from the Mosel to Baden who had been honing their skills in family run Weingut for hundreds of years. Now that German sweet wines were muddied in the minds of the average drinker, it sparked the producers to go full circle back to making new style dry wines. So, for those who picture Germany, and only sweet rich wines come to mind, fresh crisp dry wines with oodles of character are equally as authentic. Just ask Erni Loosen who has spent his career perfecting the dry Grosses Gewächs wines in the style of his Great Grandfather!

If you have ever visited the Mosel, the sheer verticality of the vineyards will be ingrained in your memory. As you meander along the river the vineyards loom over you on cliff faces either side. An incredible amount of skill and courage are required to avoid sliding under the vines on the slate as the pickers comb through the vineyards time and time again to pick each bunch at its perfect ripeness. There is no denying that making great German Riesling is a labour of love.

Complicated labels can baffle even the savviest wine buffs and German wines are notorious for this. The wine label states the village and the vineyard followed by – and this is where it becomes slightly mind boggling - either an indication of their place on the Prädikat system (more on this later) or if they are trocken (dry). If they are, it will then tell us if the wine is a Grosses Gewächs (GG).

In the early 2000s a group of the top producers - the Verband Deutscher Prädikatsweingüter (VDP) - created a classification system. Much like the Grand Crus of Burgundy, GG’s can only come from the best sites according to the VDP or Grosses Lage in German. The yields must not exceed 50 hectolitres per hectare, and the grapes must be physiologically fully ripe and hand harvested. This allows you to identify the very best German dry wines.

The Prädikat system is a German wine law dating back to 1971. It classifies the quality of wines based on the level of sugar in the grapes at harvest. Each producer makes several different wines depending on the vineyard and how many passes they make through the vineyard during the harvest. The vintage variations can also affect the levels of ripeness they are able to achieve.

Kabinett – earliest-picked grapes and can be dry or off-dry in style.

Spätlese “Late Harvest” - grapes picked later in the growing season. These can be sweet, off-dry or dry.

Auslese “Select Harvest” - grapes that are specially selected from the late harvest. These grapes are usually extremely ripe. Many, but not all, Auslese wines are sweet.

Beerenauselese (BA) “Berry Select Harvest” - carefully chosen, overripe grapes, harvested by hand, that have botrytis (noble rot). Beerenauslese wines can be made only when weather conditions permit the grapes to over ripen on the vine.

Eiswein “Ice Wine” - grapes that have frozen on the vine. The grapes are picked and pressed while still frozen, at a maximum temperature of -7 0C.

It is impossible to think of the top estates of Germany – and the world – without considering Egon Müller-Scharzhoff and JJ Prum, both masters of the sweet and off-dry styles. Müller’s Scharzhofberg vineyard is unrivalled in terms of history and, by adopting a minimal approach to winemaking and bottling his wines young at just 6 months, he produces concentrated, terroir driven off-the-charts wines. His Trockenbeerenauslese is the worlds most expensive white which recently sold for close to £14,000 on release. Prum is better known for late harvest and long fermentation, producing wines of remarkable poise, refinement and mineral intensity.

Helmut Donnhoff is another icon based in the Nahe who lets the vineyards do the talking. His vineyard led approach results in the style of wine being determined by the terroir itself. They produce 20 cuvees across various sugar levels with around 60% of their production dry.

Weingut Keller has risen to international superstardom over the past decade with his Grosses Gewächs holding cult status – “G-Max” is one of the most expensive and sought-after wines in the world that is often presented alongside Burgundy royalty such as Coche-Dury.

Elegance, power, precision – breakfast, lunch, dinner – a wine for today, tomorrow or your children’s tomorrow - you can find all these things in Germany.