The order book has changed, click on retry to view the updated order book.

Wines marked with indicates a LiveTrade wine on which we quote firm, live bids at which you can sell to us 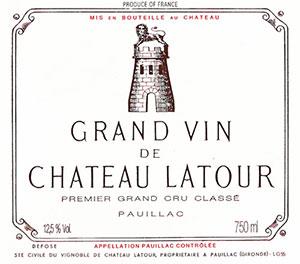 Really starting to show that class and breeding now: as we move further back in time, the Latour character comes to the fore with grilled, peppery meat, gravel, a touch of toasted nuts and that opulent blackcurrant style. It’s hard to describe a wine that combines the intensity of a massively reduced, cooked-down meat broth, the featherlight touch of a perfect blackcurrant sorbet and a finish that ebbs and flows through strawberry and cigar smoke for over 40 seconds – well, I suppose that does it.

A hot, dry August produced very concentrated grapes in 1996. However, it turned a bit rainy in mid-September through early October, making the vintage less consistent on the Right Bank and in Graves. But as the weather turned glorious from early October on, it was an amazing year for later-harvested Cabernet in the Médoc. There was new ownership at Latour by this time, and a new vat room was completed just prior to the harvest this year. The 1996 Latour is medium to deep garnet in color with a profound earthy, meaty, gamey nose with hints of blueberry preserves, crème de cassis and pencil shavings. The palate is full-bodied, concentrated and packed with muscular fruit, with a firm, ripe, grainy backbone and epically long finish. Showing much more youthfully than the 2000 tasted on the same day and still possessing bags of youthful fruit in the mid-palate, this beauty is going to go on and on! LPB

A spectacular Latour, the 1996 may be the modern day clone of the 1966, only riper. This vintage, which is so variable in Pomerol, St.-Emilion, and Graves, was fabulous for the late-harvested Cabernet Sauvignon of the northern Medoc because of splendid weather in late September and early October. An opaque purple color is followed by phenomenally sweet, pure aromas of cassis infused with subtle minerals. This massive offering possesses unreal levels of extract, full body, intensely ripe, but abundant tannin, and a finish that lasts for nearly a minute. Classic and dense, it displays the potential for 50-75 years of longevity. Although still an infant, it would be educational to taste a bottle. Anticipated maturity: 2015-2050.

Tasted blind as a vintage comparison at the Valandraud vertical, the 1996 Latour is a wine that continues to perplex. I just think that given the vintage, the team would have made a far superior wine nowadays. That said, it is still a very fine Pauillac. Here, it conveyed a sense of "airiness" on the bouquet, more backward and surly than other bottles tasted with attractive damp earth and leather aromas. It feels strict and uncompromising when compared to others. The palate is medium-bodied with light and supple tannin, tart red berry fruit, black pepper and plenty of tobacco indicating its Pauillac origins. This is a well balanced, correct and elegant Latour, not the powerhouse of the 2000 or 2005, yet continuing to give drinking pleasure unabated after two decades. Tasted December 2016.
- The Wine Advocate #229, Feb 2017

Dark, brick-rimmed red, not the saturation of 1996 Lafite; crisp, closed, finely gravel-backed Cabernet Sauvigon to smell, persistent and aromatic; very elegantly balanced concentrated middleweight with a fine textured, dry tannin; crisp, ripe, refined and beautifully acute, still dry in texture but with a lovely, finely gravel infused Cabernet flavour; very long and very subtle across the palate, all elegance and understatement, but with no lack of power there either, richer and firmer, and almost bigger in taste than the Margaux, but every bit as long and complex; even more gravelly. More scent and scope here than in the 1996 Lafite, but every bit as long; wonderful definition, energy, character, and then great length too. A most splendid Latour, without needing to be super-concentrated or super-tannic or super-extracted. Here is purity, definition, scent, length, inner energy and individuality, without anything sticking out or getting in the way! So harmonious as to be a great pleasure now, but best leave till its 18th birthday at least. Drink 2014-40

Quality 981 | Brand 998 | Economics 959 | buzz brand
Quality: Predicted life of 30 years, one of the longest drinking windows in its peer group for the 1996 vintage, which averages 14 years Brand: Strong restaurant presence, featuring on 52 of the world's top wine lists, including Napa Wine Bar & Kitchen Economics: #2 most active wine at auction, its top 5 vintages having seen 4,896 75cl equivalent bottles traded in the past year Production: Lower production than its peer group average of 151,058 bottles

The wine has been added to your basket.

Please continue browsing or go to My Basket to confirm.

Having followed COVID-19 Government advice, we have temporarily closed our London office until further notice. Click here to read more

We use cookies, which are small text files, to improve your experience on our website and to show you personalised content. You can allow all or manage them individually.